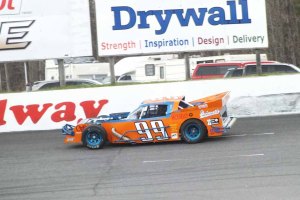 “The modified is definitely a different animal,” he commented. “It’s got a lot more horsepower, bigger tires and the weight difference makes a big difference. (We had) a bit of a push center off, but with the help from Jeff Walt, we were able to help that out a little bit. Unfortunately, we had a leak and weren’t able to get as many laps as we wanted. We’ll get her fixed up and come back next week and get it handling better. As of right now, it’s quick. We’re not too far off, but I think we can get it going in the ends and pick things up even more.”

Emms will return to Sunset Speedway in a couple of weeks to kick off the OSCAAR season. Emms is scheduled to run the modified full-time under the ADAMS Motorsports banner.

“Coming into the season opener, I’m really excited to see who all shows up for one,” he said. “We’ve got so many guys registered, but that’s always kind of the thing where you never know who will come and how it will go. It’ll be interesting to see how we stack up against everybody and definitely really excited to get out there and race this thing. It’s been fun to drive so far, even with just a few sessions out there, so I’m excited to get out there with a field of cars and see how we stack up.”

Beyond Sunset, the schedule includes a series of tracks and dates ranging across the whole province of Ontario. Emms stated on Sunday that he is looking forward to getting to Full Throttle Motor Speedway after winning the triple features last year in the Outlaw Modified division en route to the series championship.

“I was pretty fortunate there so I’m excited to go there this summer,” he said. “There’s a couple of big races there – the Rick Woolner Memorial – so hopefully we can show well there, and have fun doing it. I love the short track racing on the high banks and we’ll see how well Full Throttle treats us.”

Be sure to keep up with Emms and ADAMS Motorsports all season long, and view photos from the test session at http://www.adamsmotorsports99.com.